Effect of friction, temperature and velocity on finite element predictions of metal flow lines in forging

In metal forming, especially in forging, metal flow lines formed during rolling or drawing play decisive role at product strength and integrity [1-4]. Of course, they vary globally with plastic deformation due to metal forming. Therefore, they store the history of the metal formed products and they are being utilized for qualitatively evaluating product quality or durability of power transmission or load supporting parts particularly including bearings and gears.

Description of process under investigation:

Figure 1 shows a three-stage hot forging process to fabricate initial blank of a ring rolling process for outer race of a bearing. Its process conditions and analysis information are as follows: The material is STB2 of which flow stress is expressed as in Figure 2. It is assumed that the initial temperature is uniform as 1130℃. The dwelling time before upsetting is 0.5 seconds. All the thermal information is summarized in Ref. [5]. 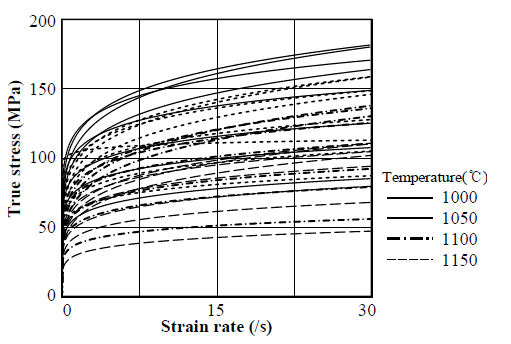 To investigate into the effects of temperature on metal flow lines, isothermal and non-isothermal analyses were conducted using the flow stress depicted in Figure 3. The initial temperature of material is assumed 1130℃. The coefficient of Coulomb friction was assumed 0.3 and the punch speed 200 mm/s. 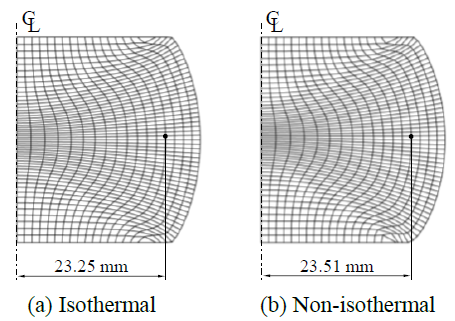 Figure 3(a) and Figure 3(b) show the predictions obtained by the isothermal and non-isothermal analyses, revealing that the temperature is not a major factor. Isothermal analyses were conducted to investigate into effects of friction on metal flow lines, under various frictional coefficients of 0.1, 0.2, 0.3 and 0.4. For these analyses, it was assumed that temperature, initial strain and velocity were 1130 ℃, 0.0001 and 200mm/s, respectively.

Isothermal analyses are conducted under various velocities to reveal their effects on metal flow lines. For these analyses, it was assumed that temperature, initial strain and coefficient of Coulomb friction were 1130℃, 0.0001 and 0.3, respectively. A mechanical press of which stroke and speed are 220mm and 90 rpm, respectively and hydraulic press with constant velocities 200mm/s and 400 mm/s are considered. 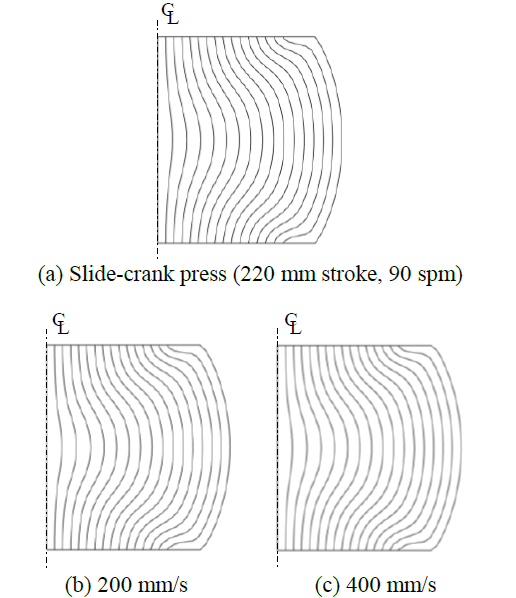 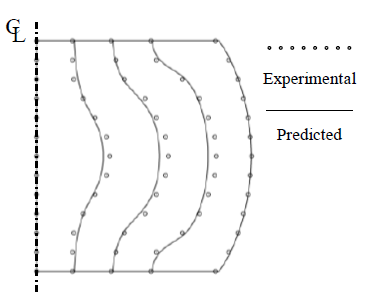 Figure 6. Comparison of experiments and predictions

The predictions of Figure 5(c) were selected to be compared with the experiments, as shown in Figure 6. The comparison shows that the predicted metal flow lines are relatively smooth especially near the maximally barreled region. It is believed that relatively small predicted dead metal region near the central axis may cause the difference. This metal flow difference in upsetting causes the difference shown in Figure 7 between the predictions and experiments in the piercing stage. 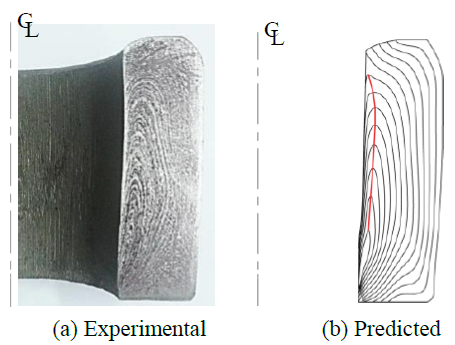 Figure 7. Comparison of experimental and predicted metal flow lines at the second stage when the same conditions as Figure 4(a) are employed

In the article, to be posted next week, the influence of flow stress on the FE prediction of metal flow lines will be presented.